The Data7 was published as an engineering paper in SCAM’18. You can find it here:

To cite Data7, pleae use the following bib entry:

Data7 is a tool that put together vulnerability report and vulnerability patches of a given software project in an automated way under the form of a dataset. Once created the dataset can then easily be updated with the latest information available. The information that can be found in the dataset is the following:

When investigating a vulnerability, a security analyst need as much information as possible on it and usually reports are a good starting point. However, the most insightful piece of information on the vulnerability is usually the fix that was created to solve it. From the fix, the origin of the vulnerability and its type can be determined. Fixes when available can be found as separated links in the reports but it is far from being always the case. If linking fixes and reports by hand is possible, it is time consuming. So when the analysis of not one but many vulnerabilities is considered then it is not possible to do it by hand anymore. A good example of a case where the analysis of a large number of vulnerabilities is required is the creation of a Vulnerability Prediction Model.

Thus, the link should be made automatically and not manually which is possible by cross-checking information from vulnerability report, bug trackers and versioning history and that’s precisely what data7 is doing.

To create and update a dataset an internet connection is required. However nothing is required to read an existing data7. Other dependencies are handled through maven.

How does it work ?

For a given project P

The dataset generated by data7 can be accessed in two ways (a third one is planned in the future) either through an API relying on a data7 Object that can be serialized or through an XML file. 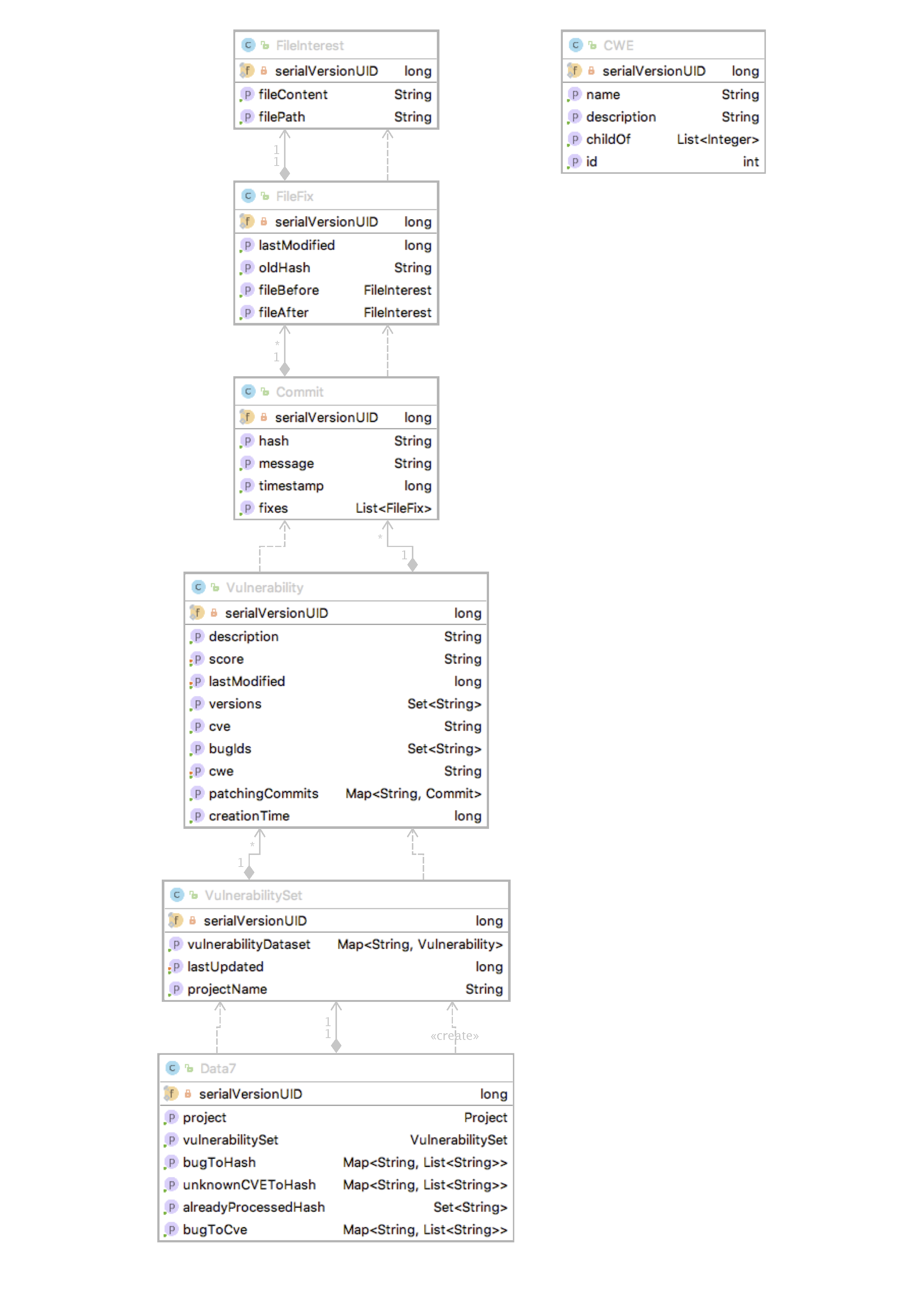 When calling upon the creation or the update of a dataset, the user will receive a Data7 object. This object contains information on the project the dataset is based on (see next section), and the vulnerability dataset (VulnerabilitySet Object), other fields are present but only contain additive information required by the tool for update such as a list of bug id and their corresponding hash commit, a list of bug id to CVE identifiers, a list of all hash already processed and a list of found cve identifiers in commit for whose report is not yet available which can be interesting to investigate not yet disclosed vulnerabilities.

The vulnerabilitySet object is composed of the following information, a list of every vulnerability ever reported for the chosen project (list of Vulnerability Object) and the last time the dataset was updated last.

A Vulnerability Object entry has the following information integrated:

A Commit Object contains the hash, the message and the timestamp of the commit as well as the list of files that were modifier (FileFix Object).

A FileFix Object contains information on time the file was last modified before the given commit and its corresponding previous hash as well as the file in its state before and after commit (FileInterest Object).

A FileInterest Object contains the text of the file and its fullPath in the project.

The dataset can as well be exported as an XML file that will only contain vulnerability with reported fixes. The schema of the xml is the following:

As analysts might want to import the dataset to their own tool or favourite database, a last option is possible that allow the user to import the data at the same time the dataset is being built/update through an Observer. Indeed, when asking to update/create a dataset the user can pass as an argument a listener that implements the DatasetUpdateListener interface that will notify of the latest update in live.

and is presented as follows:

This interface allows to develop more functionality for the dataset such as the one currently in development in the graph section, which uses a temporal graph database to store the dataset. Note that it might be better to first do a batch import and then use the interface when update is being done.

but it can easily be extended to any other project where it is possible to find the following information:

How to use the tools

Note that on creation of the dataset it might be better for the largest project (Linux, Wireshark)to first clone the git repository using command line in your folder under the subfolder git (in the case of Linux, don’t forget to rename the created folder “linux” into “linux_kernel”)

In this tool, three custom-made libraries are included:

This library coded in Kotlin provide some useful function when trying to mine a git repository. The following methods are available

this library work on local repository but also offer the possibility to clone a remote repository:

This library coded as well in Kotlin contains additional useful function such as downloading a file, unzipping a file, normalizing a path and getting the recursive list of directories.

For those wishing to analyse cwe as well a last library is made available. The library can simply be called using:

This call will download on the nvd website the xml with all the description of CWE and parse it before serializing for good. This is especially useful for studies that focus on CWE when using the data7. In addition a field childOf is present for each CWE which allows to rebuild the hierarchy of CWE type.

This tool was developed during my thesis and is made available to everyone. :)